A WebSDR is a Software-Defined Radio receiver connected to the internet, allowing many listeners to listen and tune it simultaneously. SDR technology makes it possible that all listeners tune independently, and thus listen to different signals; this is in contrast to the many classical receivers that are already available via the internet. Each of the listed sites indicates the bands they monitor and the antenna type that they are using.  There are 7 sites in the USA and others around the world.  It is easy to see the band activity while using the waterfall display as well as seeing the relative noise across the bands.  The waterfall display is a time history (vertically displaced) the most recent being the bottom-most line.  Frequency runs from left to right and signal strength at the receive site is color coded from blue to red. You can adjust filter bandwidth and center frequency with readouts on frequency and bandwidth.  Tuning can be accomplished either by mouse control or button adjustments. The WEBSDR site provides a quick way to see activity at different parts of the country. A friend of mine at Piqua, OH has used the Reston, VA site to monitor his SSB transmission from Piqua as it is received at the VA Site.

Hope you all enjoy the site
Wally KI4VPD

PSK31 a perfect solution for DXCC within the Villages restrictions

Article from:  Rick WD4JJI
The digital modes offer many new frontiers to explore and enjoy.  This article explores what can be done with low power, PSK 31 and a short (22 Foot) antenna.  Many of you are working PSK 31 or other digital modes already.  The Villages antenna restrictions are somewhat challenging but with some thought and ingenuity a very acceptable operating antenna is achievable. I discovered the The Villages Amateur Radio Club and joined at the first meeting I attended in October, 2010.  I received a copy of the Antenna CD containing a variety of Villages antenna systems.  I had high hopes that I would find the best antenna solution on that CD.

I also met a few hams that showed me what they had done.  But I could never get their commitment to a high level of satisfaction with their “restricted” operation.  And my goals may have been different than theirs.  I not only wanted to get on the air but I wanted to access DX from all corners of the world.  Considering the restrictions,  I wanted to achieve this goal with “low power” to avoid any interference with neighbors and the antenna had to be  “invisible”.  CW was an operating mode on the top of my list but I was rusty and it would take some time for my skills to come back up to par.  With a commitment to revisit CW, I moved on.

Should I buy a Linear?

Reviewing the CD again, I found two ideas that I thought would work for me.  The one I wanted the most, was a flagpole but it required a lot of work and I wanted to get on the air quickly.  It also would take time to convince the XYL that the first landscaping project we were going to undertake was to plant a flagpole in the front yard.  Deciding I wasn't ready for that challenge yet, I continued with the other idea which was a wire, 88 feet long, on the roof, with a counterpoise of the same length on the ground. The picture showed the wires coming through the wall into the shack.
So while my XYL was out of the house, I pulled the desk away from the wall and drilled a hole through it, ran the wires to an MFJ tuner I had and to my surprise it loaded very nicely. I started making phone contacts right away and my range had increased significantly. I was able to work into western Europe on a consistent basis but trying to compete with the power stations was a real challenge. As I increased power I started seeing RF in the shack that affected the USB ports on the computer and froze the logging program. The fix for this was an RF choke installed outside of the shack allowing a coax connection to the tuner.

Being a former RTTY operator, I looked at that option first. 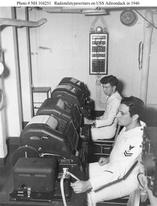 I continued to make contacts stateside, into Europe and South America but I still had to compete with the power stations who frequently made me feel like a QRP station.  As the frustration mounted I began looking for other options.  My logging program had many digital modes built in and being a former RTTY operator I looked at that option first. The program decoded just fine but as I was scanning the band I found a new sound,  and was impressed with how small the band width was compared to that of RTTY.  This new mode was PSK-31.  I started reading the mail and was impressed with the operating features, the DX contacts that were being made and the consistent reports of 25 to 40 watts of power being used to make these solid contacts.

I made the decision to invest in a SignaLink USB

I made the decision to invest in a Signalink USB and once configured, I was on PSK-31.  I made some stateside contacts and started to make some DX contacts.  I was really impressed with the ease of operation and the quality of the DX I was working.

Article from: Leon K8ZAG
The widespread availability of powerful Personal Computers that include a digital sound card for Digital Signal Processing (DSP), is allowing radio amateurs to use free software for digital communication. The distinguishing features of HF digital modes today are the use of lower power, small or attic antennas. Today the TNC is replaced by an on-board sound card in the personal computer making it easy to try digital modes. 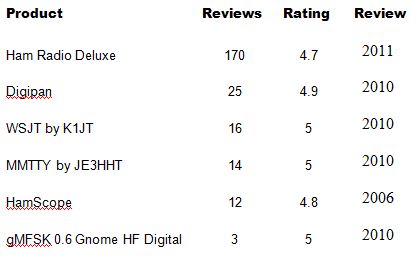 Most like on Ham Radio Deluxe because it decodes well, easy to use and has interfaces to the past and present transceivers. YES all with only your mouse clicks! You will need the keyboard only for RAG CHEWING. Try them all they are free you may like HAM SCOPE or DIGIPAN better than HRD.

PSK31 is a digital mode using keyboard to keyboard QSOs

PSK31 is created by shifting the phase of the carrier. In the most-commonly-used variant (BPSK31), binary information is transmitted by either imparting a 180-degree phase shift (binary zero) or no phase-shift (binary one) in each 32ms symbol interval. The boundaries between character codes are marked by two or more consecutive zeros. Since no character code contains more than one consecutive zero, the software can therefore instantly detect the 'space' between characters. Martinez arranged the character alphabet so that, as in Morse code, the more frequently occurring characters would have the shortest encodings, while rarer characters used longer encodings. He gave the name 'varicode' to this encoding scheme. Usually short QSO’s exchanging station info, weather, name and report etc. PSK-31 is a full duty cycle mode. 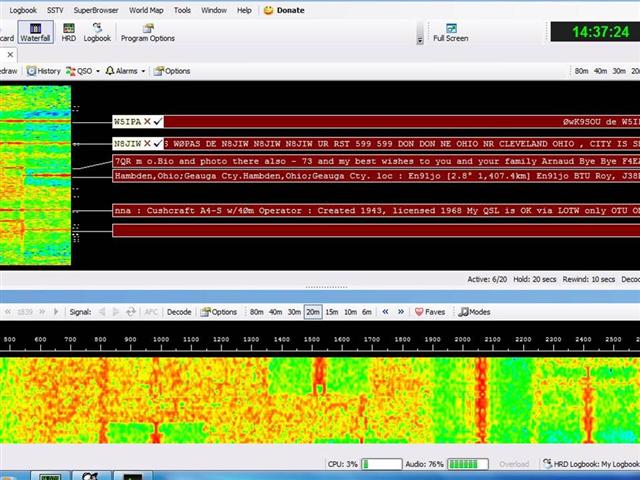 HRD PSK-31 Super Browser Display
PSK31's bandwidth of 31.25 Hz was chosen because a normal typing speed of about 50 words per minute requires a bit rate of about 32 bits per second, and specifically because 31.25 Hz could easily be derived from the 8 kHz sample rate used in many DSP systems, including those used in the computer sound cards commonly used for PSK31 operation (31.25 Hz is 8 kHz divided by 256, and so can be derived from 8 kHz by halving the frequency eight times). 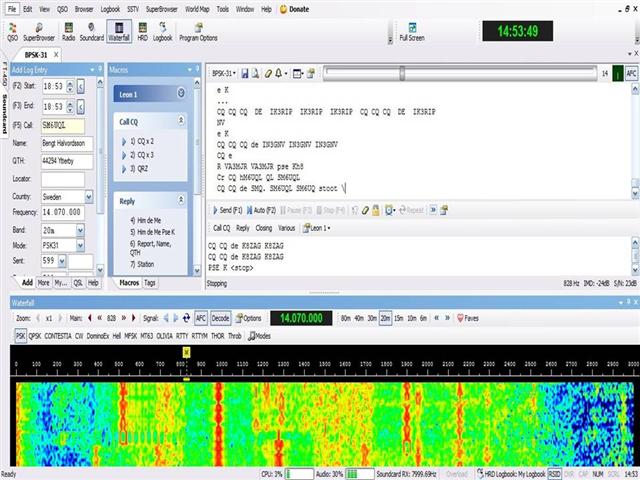 HRD PSK-31 QSO Display
Colloquial usage of the term 'PSK31' in amateur radio usually implies the use of the most commonly-used variant of PSK31: binary phase shift keying. BPSK uses no error control, but an allied mode, QPSK31, uses four phases instead of two, to provide a degree of forward error correction. It is very simple to switch from BPSK to QPSK if difficulties arise during a contact.

Varicode is a Huffman code used in PSK31

Varicode supports all ASCII characters, but the characters used most frequently have shorter codes, The space between characters is indicated by a 00 sequence, a variation of Fibonacci coding, Originally created for speeding up real-time keyboard-to-keyboard exchanges over low bandwidth links, it is a very useful format to shrink text files. 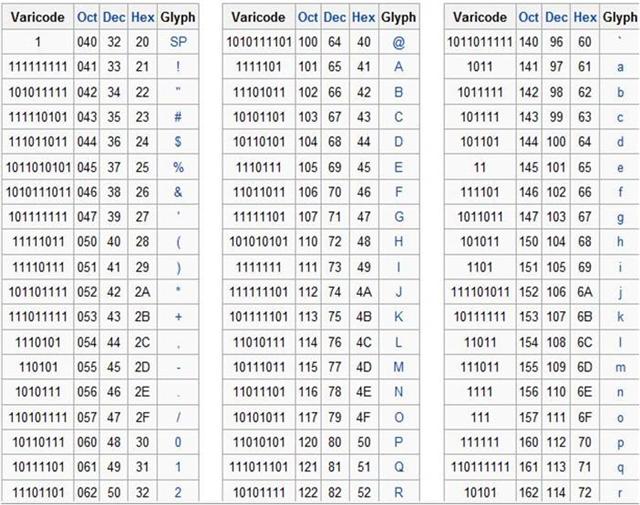 RTTY, using either AFSK or FSK modulation, is moderately resistant to vagaries of HF propagation and interference, however modern digital modes, such as MFSK, use Forward Error Correction to provide much better data reliability. Landline teleprinter operations (TTY) began in 1849 when a circuit was put in service between Philadelphia and New York City. Émile Baudot designed a system using a five unit code in 1874 that is still in use today. Teleprinter system design was gradually improved until, at the beginning of World War II, it represented the principal distribution method used by the news services.

SSTV is narrowband television takes up to a maximum of 3 kHz of bandwidth providing still pictures transmission, usually taking from about eight seconds to a couple of minutes, depending on the mode used, to transmit one image frame. SSTV uses analogue frequency modulation, in which every different value of brightness in the image gets a different audio frequency. In other words, the signal frequency shifts up or down to designate brighter or darker pixels, respectively. Color is achieved by sending the brightness of each color component (usually red, green and blue) separately. This signal can be fed into an SSB transmitter, which in part modulates the carrier wave. A transmission consists of horizontal lines, scanned from left to right. The color components are sent separately one line after another. The color encoding and order of transmission can vary between modes. The modulating frequency changes (between 1500 and 2300 Hz) corresponding to the intensity. The modulation is analogue, so even though the horizontal resolution is often defined as 256 or 320 pixels, they can be sampled using any rate. The image aspect ratio is conventionally 4:3. Lines usually end in a 1200 Hz horizontal synchronization pulse of 5 milliseconds. 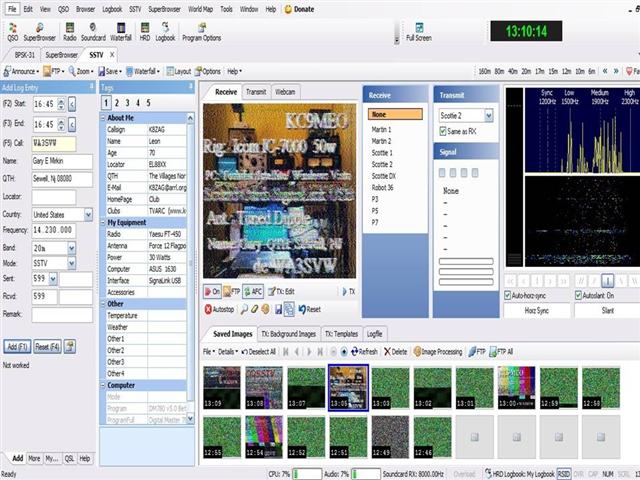 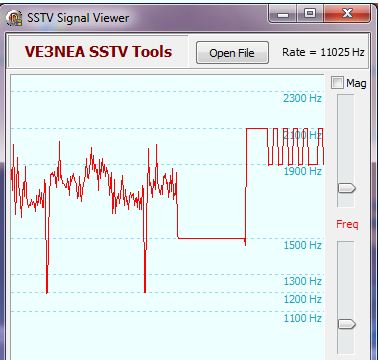 Interfacing to your PC sound card interface to provide all modulate / demodulate functions as well as operator interface and control. The sound card is attached to an HF SSB rig using the PC speaker out and microphone in ports on the sound card. Typically, there is an interface installed between the sound card and the rig to adjust signal levels and provide good isolation between the two devices. On the SSB rig side, typically the microphone input and external speaker out are used. PTT control is done via a control signal on a PC serial port (RTS or DTR) and isolated with an opto isolator to drive the rig PTT line. In some transceivers the data port of the rig can be used in lieu of the microphone and external speaker ports. You can buy or build your interface. 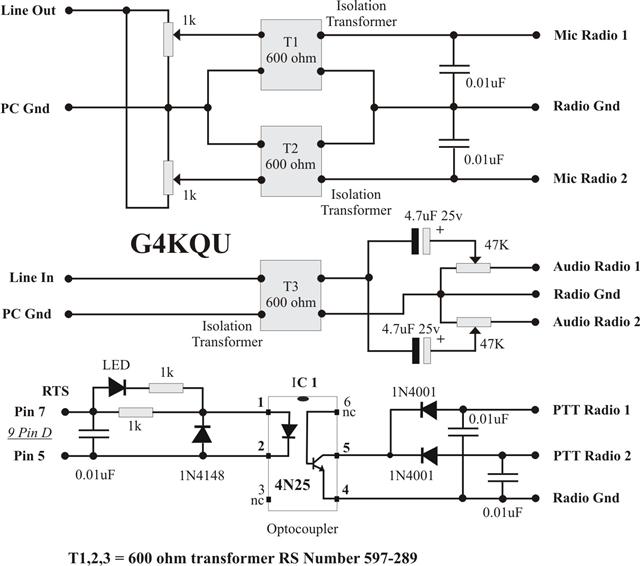 Homebrew Interfacing from G4KQU
600 Ohm to 600 Ohm Isolation Transformers are available from All Electronics for $1.25 each plus shipping 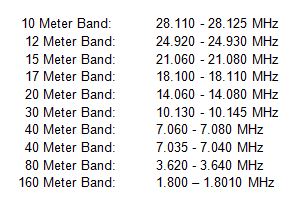 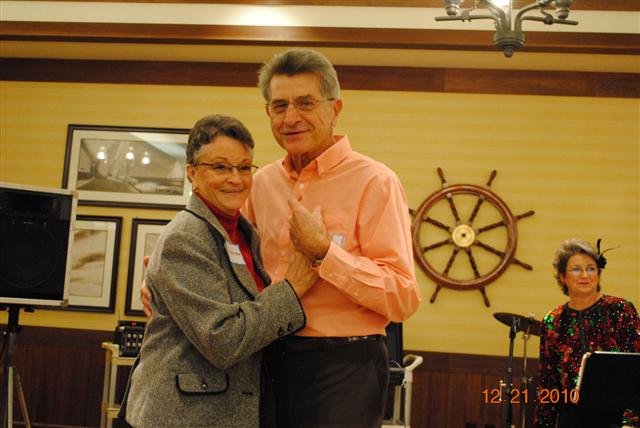